City of Prospect has taken a number of important and proactive steps to protect our community and staff as we face this unprecedented situation of the global COVID-19 Coronavirus pandemic and the nationwide Public Health Emergency.

We need to take all reasonable steps available to protect our community, our Elected Members, our staff and volunteers (and their families) against the spread of this infection while ensuring we deliver services as close to ‘business as usual’ as possible. 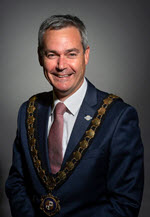 David O’Loughlin proudly serves the Prospect community as Mayor for City of Prospect.

David was born in Port Pire and educated in Adelaide. Before working in local government, he held executive positions in public and private sectors of the construction industry for over twenty-seven years.

Elected as a Councillor in 2003 before being elected as Mayor of the inner metropolitan City of Prospect in November 2006, and again in the following consecutive election terms 2010, 2014 and 2018. David has been serving his community for more than eighteen years in local government.

In early 2015 David completed his two year term as the President of the Local Government Association of South Australia (LGASA) and continues to serve on the Executive of LGASA, serving over eight years in total, where he has championed economic development, regional service sharing, boundary adjustment reform, planning reform and service improvements more generally. In addition, he is the Chair of Local Government Association Procurement Pty Ltd and has recently completed a four year term as the local government representative on the South Australia Government State Commission Assessment Panel (SCAP).

In 2016 he was elected as the President of the Australian Local Government Association, the peak body representing local government including at Ministerial Councils and the Council of Australian Governments (COAG) and re-elected in 2018 for another two year term.

With over 30 years of service through numerous organisations, David’s commitment to the broader community is evident. David also donates his time to many organisations including service clubs, parishes, and schools.

David is known for his passion for design and twentieth century architectural heritage and is President of the Adelaide Chapter of the Art Deco and Modernism Society of Australia.